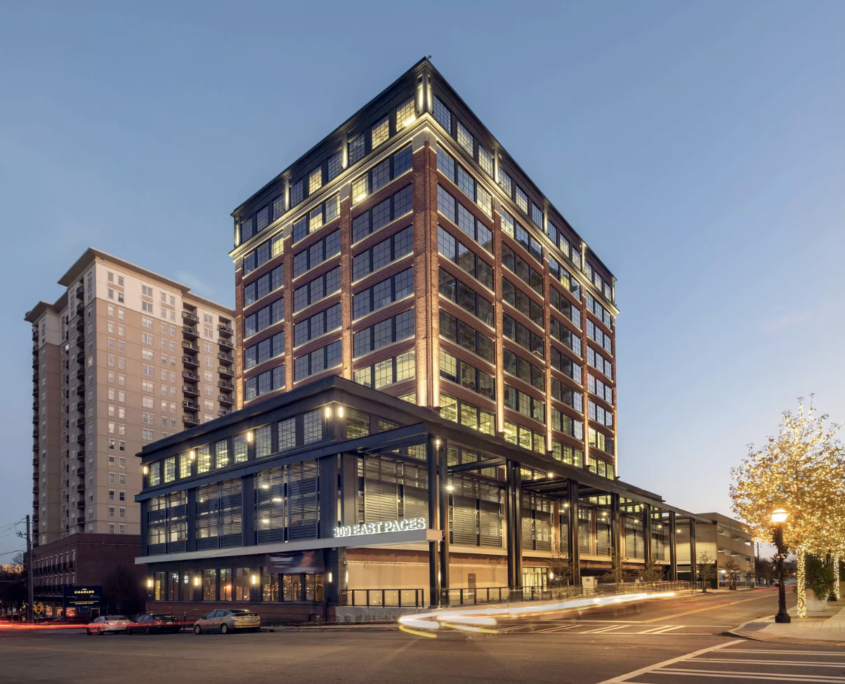 A once unassuming—if not drab—office building in Buckhead has been primped for the modern age and is leased up to capacity, officials said this week.

The former headquarters of the Charlie Loudermilk-founded Aaron’s furniture company, 309 East Paces Ferry Road—commonly called the Aaron Building—began its transformation after the company opted to sell it and relocate to Cobb County in 2015.

The joint venture of Knox Properties and Redan Group tackled the renovation.

What was once a blank white, 105,000-square-foot box is adorned now in a modern mix of brick, metal, and glass near The Shops Buckhead Atlanta and Buckhead Theatre.

The 12-story office tower is at full capacity, according to Lincoln Property Company Southeast officials, who shared the news soon after this story was published.

On Tuesday, Lincoln announced it had secured nearly 50,000 square feet of new office leases and expansions, with two new leases that filled the building up today.

Coworking company Industrious expanded its footprint in the upgraded building and now takes up more than 30,000 square feet.

“It’s no surprise to me that with the design, accessibility and surrounding amenities that 309 East Paces is fully leased with some of the highest rents in all of Atlanta,” said Lincoln’s Hunter Henritze, according to a press release.

Take a closer look at the upgraded office space below.

This story was updated on January 23, 2019 at 12:25 p.m. to indicate that Lincoln had just finalized the last lease agreements needed to fill up the building.

Residential Deal of the Year: The Charles leads Atlanta in new condominium ...
Scroll to top