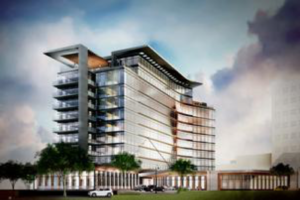 A roughly $80 million project planned for the Buckhead Village will bring a hip new hotel brand to Atlanta.

Two prominent Atlanta developers, Regent Partners LLC and The Loudermilk Cos., are teaming up on the approximately 200-room boutique hotel.

It would come to 371 East Paces Ferry Road, the former headquarters of State Bank & Trust Co., and a short walk from The Shops Buckhead Atlanta with its multiple restaurants and designer boutiques including Dior and Tom Ford.

Denver-based Two Roads Hospitality LLC will flag and manage the hotel under its Thompson Hotel collection, which includes The Beekman in Manhattan, along with hotels in Nashville, Chicago and Seattle.

The Thompson Hotel in Buckhead will include about 6,000 square feet of meeting space, a local chef-driven restaurant, and a rooftop restaurant and bar. The existing bank building on the site will be demolished and a 10-story hotel will rise in its place.

The hope is break ground in second-quarter 2019, with an opening expected in early 2021.

The developers see the four-star hotel as filling a gap in the market, said Reid Freeman, president of Regent Partners.

“We want something that feels and looks different,” he said.

Freeman added Buckhead is known for its large branded hotels, such as the St. Regis and Mandarin Oriental, and a collection of select-service hotels.

The Thompson Hotel would offer a more individual, mid-priced stay. Its design speaks to the neighborhood.

“It should be interesting to see what a Thompson Hotel in Buckhead will do to feature the uniqueness of our city,” said boutique hotel expert Kim Bardoul, partner at The Highland Group. “They are known for their ability to immerse within the culture of the surrounding community in design, unique amenities and locally sought-after food and beverage.”

The project also brings more density to the Buckhead Village where at least half a billion dollars of new development is in the works, marking more momentum for the area away from its suburban past.

“Two years ago, this site wouldn’t have worked” for a hotel, said Brian Lu, vice president and director of development for Loudermilk.

The Buckhead Village is a collection of low-rise brick buildings and dive bars transitioning into a more walkable neighborhood with new residential towers and restaurants. The heart of the Village is at convergence of Roswell, Peachtree, Paces Ferry and Pharr roads, but development continues to expand east and west.

The Village became more popular with developers over the past several years as the remaining sites farther north on Peachtree and Lenox roads near Georgia 400, both luxury malls and the MARTA train stations were scooped up for new projects, especially during a 2005-2009 office tower boom.

“We are finally starting to see development off the spine of Peachtree,” Freeman said. “We think this a good and responsible way for more density.”

In recent months, Portman Holdings has been quietly working on a deal buy the Sobu Flats condo building on East Paces Ferry Road, a property that dates back to the early 1950s.

Early concepts have focused on an adaptive reuse of the 130-unit condo building that converts the property into a mid-century styled boutique hotel, according to sources familiar with discussions.