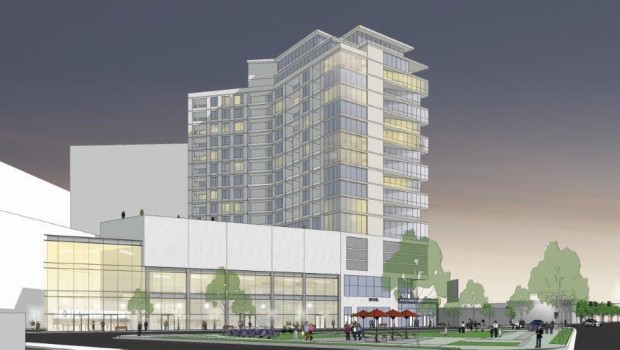 The Loudermilk Companies today sent BuckheadView a “real” rendering of the mixed-use residential/retail complex it is working on for the triangle property on Peachtree road across from Charlie Loudermilk Park and backing up to East Paces Ferry Road.

Loudermilk Companies President and CEO Robin Loudermilk told BuckheadView the plans are for a mid-rise residential tower (maybe 8-10 stories) with 86 mostly two- and three-bedroom residential units. It will also include 25,000 to 30,000 square feet of ground-floor retail space.

He said the plans are still in the formative stage in that it is not definitely determined if the residential units will be rental or for purchase and if the retail space will be one-story or two.

There may be a few one-bedroom residential units, he added, but for the most part the units will be large with two and three bedrooms. “We are still seeing what the market wants,” he explained.

Asked if there is a date for start of construction, Loudermilk replied, “Just waiting to get the financing all pulled together. Other than that, we are ready to go.”

The triangular block, bordered by Peachtree and East Paces Ferry roads and Bolling Way, is now vacant land except for a strip of shops including Mitchell Gold + Bob Williams, Chuck’s Firearms and The Fish Hawk outfitters. It formerly also included bars and restaurants, including the former Buckhead Bottle Bar.

One thing for sure, the plans that Loudermilk sent BuckheadView today are a world apart from the “fake” plans posted by Curbed Atlanta and picked up by the Bisnow real estate news service.

On Tuesday, Curbed Atlanta said Joshua A. Reeves, of Atlanta Fine Homes Sotheby’s International Realty, sent “over a vision he’s been working on for a year with Stephen Holland, of Holland Architects.” It would include “at least 200 four-star hotel rooms and 40 copious premium residences with (a) separate interior elevator atrium.” (Click here for the Tuesday Curbed Atlanta story.)

But the land is owned by The Loudermilk Companies and Loudermilk told BuckheadView he had never seen the plans before they were posted and he doesn’t even know the people identified as having presented the plans. 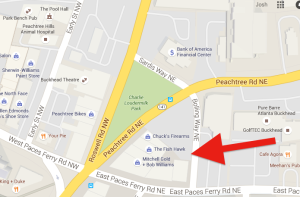 He said, “If someone wants to pay let’s say $50 million for that tract of land, I guess they can plan to build anything they want to. But we haven’t talked to anyone who has been willing to do that,” adding he had never talked to the persons identified with the renderings.

The only similarity between the Loudermilk project presented today and the project described by Curbed Atlanta on Tuesday is that both were said to include about 30,000 square feet of ground-floor retail.

Curbed Atlanta said the project would include about 31,000 square feet of street retail, including slots facing the park.

On Tuesday, Loudermilk told BuckeadView his company is still considering options for the property, one of the very prime sites in the Buckhead Village.
The Loudermilk Companies also is in the early stages of developing two office/retail buildings just down East Paces Ferry Road from this site—in the 300 block—one of which would be a medical office building and the other would become the new headquarters for State Bank.

The company also is in a partnership with the Hanover Company for a high-rise mixed-use apartment/retail project next to the Buckhead Theatre on Roswell Road, which is on the west side of Charlie Loudermilk Park.