The Loudermilk Cos. is planning an 18-story condo tower in the Buckhead Village. The real estate company has hired architect Lord Aeck Sargent to start the project’s design, which also includes 30,000 square feet of ground-floor retail. Loudermilk Cos. planned to present initial plans for the tower, which is allowed to reach 225 feet under current zoning, to the Buckhead Development Review Committee.

The roughly 1-acre site, owned by Loudermilk Cos., is a row of low-rise buildings at Peachtree Road and East Paces Ferry — the current home of two long-time, popular Buckhead stores, Chuck’s Firearms and The Fish Hawk.

Both have been fixtures in Buckhead since the ‘70s.

At the earliest, construction could begin first quarter of 2017, Loudermilk Cos. Director of Development Brian Lu said in an email to Atlanta Business Chronicle. Loudermilk Cos. President and CEO, Robin Loudermilk, told the Chronicle, “We are going to try to find a new home for them. They are part of Buckhead culture.”

One possibility is the former Aaron’s Inc. building at 309 East Paces Ferry Road, which Aaron’s founder Charlie Loudermlik turned into the company’s headquarters more than 40 years ago. The building is being renovated into loft office space with 17,000 square feet of street-level retail.

“We think we are a little too late on our timing to just now get underway with an apartment deal,” Lu said. 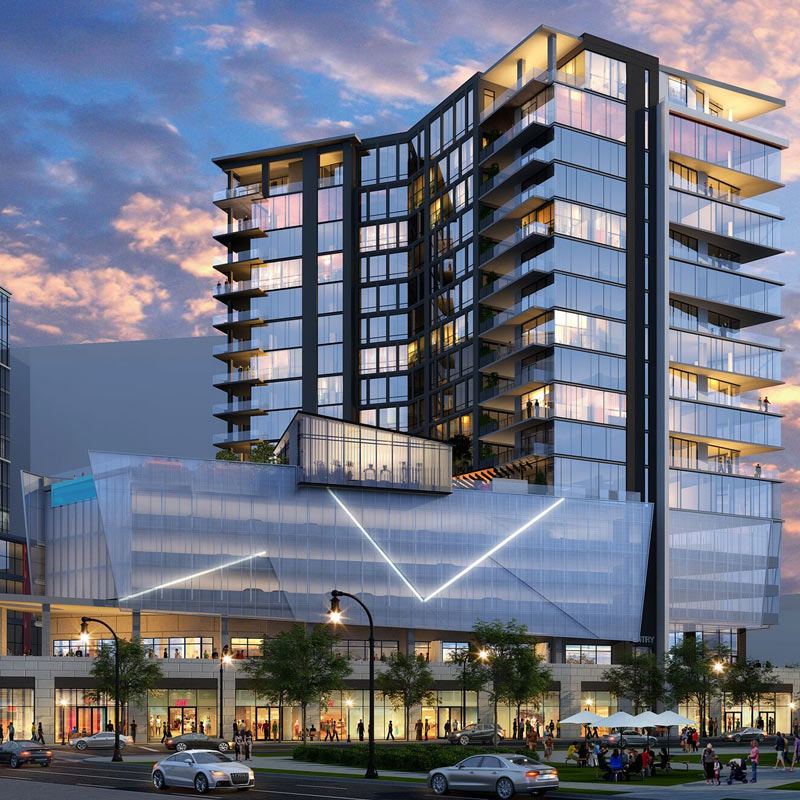 Developers with new condo proposals cite the strong job growth expected for intown Atlanta, as more companies move back into the urban core.

Just south of the Buckhead Village on Peachtree Road, JPX Works LLC plans to break ground in August on Emerson, a 44-unit condo tower. Prices will start at $1.8 million.

In Midtown, a development group that includes Olympia Heights Management and Perkins + Will is working on the design of a mixed-use project that includes condos. The development could feature a 70-story tower.

Loudermilk Cos. declined to talk about prices at its Buckhead Village condo tower. The units will average 2,900 square feet. Each will be two to three bedrooms, with an average 500 square feet of outdoor patio, kitchen and living area per unit. It’s likely any new intown condos will be on the high-end of the price scale.

A big reason: development costs, which hovered between $250 and $300 a foot, are now reaching $500 a foot. Labor shortages, the result of two sports stadiums under construction at once, are contributing to those soaring prices, developers say.

Cushman & Wakefield is carrying out a major expansion of its multifamily practice.

Cushman & Wakefield’s expanded multifamily housing practice will be housed in Atlanta, with 58 employees including 19 brokers.

The transaction comes as some analysts say the apartment market has peaked. But, in Atlanta, O’Neill said concerns about over-development and slowing rent growth are primarily confined to intown neighborhoods such as Buckhead and Midtown, and those challenges are likely temporary.

Multifamily fundamentals remain solid, O’Neill said, citing factors such as job growth across the South, which is expected to outperform the rest of the United States.

Goldfarb added, “If you look at Atlanta as a whole, there is tremendous rent growth, and as long as the fundamentals remain strong, there is no reason that can’t continue.”

The deal is also positioning Cushman & Wakefield for the long-term, O’Neill said.

Multi Housing Advisors is a big catch. Founded by Goldfarb and Robinson in 2002, it produced average sales growth of 55 percent and transaction volume totaling more than $5.9 billion over the past five years. Goldfarb called Cushman & Wakefield one of commercial real estate’s iconic firms.

Last year, DTZ purchased Cushman & Wakefield in a $2 billion transaction that created a real estate services giant with $5 billion in revenue, 43,000 employees, and more than 4.3 billion square feet under management.

he transaction closed  May 2 for $3.5 million, according to Fulton County property records. The partnership has already signed a prominent production company to a lease, Simmons said. The owners see the property as a long-term adaptive reuse development.

It’s the fourth Upper Westside corridor acquisition for Simmons and Wyatt over the past 12 months.

“We wanted to control more real estate in this area given what’s happening in the submarket and the strong interest we’re getting on our Defoor Hills loft office projects,” Simmons said.

Earlier this year, Atlanta Business Chronicle reported Simmons, Wyatt and former Jamestown vice president Jim Irwin were launching a $20 million conversion of Upper Westside industrial buildings into loft offices. The group put together 107,000 square feet of office space for its first redevelopment in the corridor at Defoor Hills and Collier roads. The buildings include 2060 Defoor Hills, and 2282 and 2300 Defoor Hills Road, which will become loft office, retail and restaurant space.

The group plans to deliver 85,000 square feet of new loft office space at those Defoor Hills buildings by mid-August, Simmons aid. The Upper Westside is part of intown Atlanta just west of Interstate 75 that’s filled with low-rise industrial buildings and surrounded by a wave of new investment in residential and retail. More developers are turning to pockets of intown industrial buildings tucked into several intown neighborhoods and converting those properties into adaptive reuse projects.

One advantage the Upper Westside enjoys over others is that it’s woven into an established high-end residential area along Collier Road, Howell Mill Road and Northside Drive.

Flextronics America has leased a full floor in Regions Plaza tower at 14th and West Peachtree streets, bringing 125 jobs to Midtown. It’s one of several deals for Regions Plaza owner Crocker Partners — 70,000 square feet in the first three months of this year.

Stream Realty Partners’ Kevin Driver and Reid Freeman represented Crocker Partners in leasing transactions with several companies during the first quarter, including New South Construction, Simon-Kucher Partners, Equipment Management Group, and Lawrence & Bundy. The CDC Foundation has signed a new lease at Bank of America Plaza, where it will occupy about 30,000 square feet. The CDC announced in February it planned to make the move. Jones Lang LaSalle Inc. represented CDC Foundation in the relocation. It plans to move this fall. Wood Partners has purchased almost 5 acres within the former Jonquil Plaza in Smyrna, where the company plans to develop 266 apartments. Halpern Enterprises owned the site. Cushman & Wakefield was marketing the property on behalf of Halpern. JLB Partners has purchased the former Cafe Jonah building in Buckhead for $2.2 million, according to Fulton County property records.

The building, which sits on about 0.3 acres, will become part of a larger Buckhead development JLB is planning across from the St. Regis Atlanta hotel and just west of the Buckhead Whole Foods Market.

JLB has assembled about three acres in the Buckhead Village along West Paces Ferry Road for the mixed-use project. Cushman & Wakefield marketed the Cafe Jonah building on behalf of a Louisiana investor. It also marketed the larger overall site, 99 West Paces.