Amid cranes and construction workers, a group of influential Atlanta businesspeople gathered to unveil the latest addition to the Buckhead Village, a sculpture honoring the man most responsible for its transformation: Aaron’s Inc. founder Charlie Loudermilk.

“I wanted to do something that recognized the evolution of Buckhead, from a small village to what it is today,” Portman said, standing beside Loudermilk, the long-time Buckhead businessman, developer and civic leader.

“Aspiration” is a fitting tribute considering how rapidly new towers are soaring over the neighborhood Loudermilk helped shape since he put his Aaron’s headquarters building in the village more than 40 years ago.

Today, that same building is getting a makeover, just another example of all the new projects underway. There’s at least half a billion dollars worth of development planned or under construction in the community’s historic heart at Roswell, Peachtree, Paces Ferry and Pharr roads. 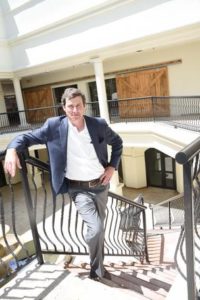 Herbert Ames of Edens stands at Andrews Square where his firm is underway on a major revamp of the shopping center. It will include favorite local tenants such as Henri’s Bakery.

“If you look around, you can see that this place is growing,” said Jim Durrett, executive director of the Buckhead Community Improvement District (BCID). “It’s becoming a truly significant part of Buckhead where Buckhead was founded.”

The Buckhead Village has long been known for its collection of bars and boutiques that occupy the small brick buildings and strip malls dotting the neighborhood. But over the past five years, it’s become a favorite of apartment developers who like the area’s location between Buckhead’s high-rise office towers and luxury malls near Ga. 400 and the million-dollar homes along West Wesley and Peachtree Battle.

It will be closely watched whether intown apartment developers have overbuilt in this cycle and may suffer short-term pain if vacancy rises and rents decline. But, one thing is certain: all those units are transforming the village into a more walkable, urban district.

Back in 2010, there were just around 500 class A apartments in the Buckhead Village, said Herbert Ames, vice president of the Southeast for developer Edens, a major landholder in the area. Since then, about 2,000 apartments have been delivered, he said. Another 1,500 apartments are now under construction and 1,500 more are planned.

Among the projects, The Loudermilk Cos. has four developments in the works, including an 18-story condo building overlooking Charlie Loudermilk Park and three office projects.

The Hanover Co. is also well underway on a 350-unit apartment tower with street-level retail next to the Buckhead Theatre.

“You’ve got almost a new entryway into the West Village,” Ames said during a walking tour May 9. In the West Village, his firm Edens is completing a major overhaul of Andrews Square, which it acquired in 2014 for $19.1 million. Now it’s filling the shopping center with tenants such as boutique Poppy’s of Atlanta, Lucy’s Market, Henri’s Bakery & Café, new concepts Bar Americano and Bar Crema, and health-focused restaurant SAMA.

The seeds for the current building boom were likely sown more than a decade ago, when Atlanta developer Ben Carter assembled some 35 parcels for a project that was envisioned as the Rodeo Drive of the South.

That project flopped as the economy tanked and lending for commercial real estate development dried up. The site was idle for years, becoming a major eyesore for Buckhead. When construction stopped, it left gaping holes in the ground, giant cranes at a standstill in the sky and a mess of steel and concrete structures.

San Diego developer OliverMcMillan scored a deal on Carter’s stalled project in 2011, paying around $25 million for the roughly eight acres. The first boutiques of what’s now known as The Shops Buckhead Atlanta opened in 2014.

“That was the catalytic project that the village was waiting for, in a sense, to create the anchor,” said David Allman, chairman of BCID and founder of real estate firm Regent Partners. “Ever since that has come into being, it’s been an accelerator, a catalyst, for an enormous amount of development, highlighted by multifamily.”

Yet, some questions remain about how to preserve the area’s character. Some West Village store owners whose boutiques had been there for more than 20 years have left, as property values and rents began to rise. Several have said the new projects threaten to erode the history and personality of the village.

Consider the Pool Hall at 30 Irby Ave., a bar from the 1940s. It was known as Tyree’s Pool Hall in James Dickey’s famous poem “Looking for the Buckhead Boys.” The poem itself serves as poignant reminder that no matter what’s being knocked down or built up, there’s always a familiar face to find in your hometown.

“Redeveloping the Buckhead Village is tricky,” said Denise Starling, executive director of Livable Buckhead. “It takes a delicate balance between realizing the value of the land and retaining what has been aptly described as its ‘tawdry charm’ by local historian Edward Daugherty.”