Loudermilk, president and CEO of The Loudermilk Cos., has struck a deal with Coro Realty Advisors LLC.

Those properties include prime retail space at 800 Peachtree, 805 Peachtree, Seventh Midtown and at the Spire and Viewpoint condo towers. Tenants at those buildings include Starbucks; the city’s first urban-format QuikTrip; and World of Beer.

The transaction also includes 606 parking spaces, many along Peachtree. 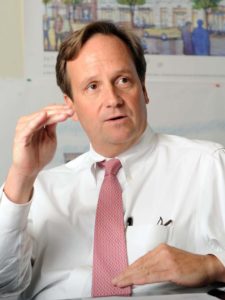 Robin Loudermilk has carried on his father Charlie’s legacy

The entire transaction could be complete by the end of April, Coro executive Robert Fransen said. A deal for Shops at Spire, which includes Five Guys burgers, is still pending, Fransen added. Loudermilk will maintain a stake in 881 Peachtree, a new mixed-use project underway with The Hanover Co. that includes a nearly 400-unit, 29-story apartment tower, with retail space and about 30,000 square feet of office.

Loudermilk had owned the Midtown portfolio for about 15 years, some of it dating back to his joint ventures with residential developer Jim Borders’ Novare Group.

The Midtown retail properties were essentially 100 percent leased. The sale sets the stage for Loudermilk, one of the Buckhead Village’s largest commercial property owners, to hasten the neighborhood’s transformation into a more walkable area dotted with old brick buildings, local retailers and restaurants, and new apartment towers.

For now, much of Buckhead’s remaining undeveloped land consists of large surface parking lots, one of several reminders of its suburban past.

“This allows us to focus on making Buckhead what Midtown already is — a true live-work-play environment,” Loudermilk told Atlanta Business Chronicle in an April 12 interview.

Consider how Loudermilk is going to shape Buckhead’s redevelopment over the next five years.

Already this year The Loudermilk Cos. has started construction on a nine-story medical office building in the Buckhead Village at 371 East Paces Ferry Road.

Loudermilk is also behind several Buckhead Village developments, both new and planned, including, “The Charles,” an 18-story condo building at Peachtree and East Paces Ferry roads.

With a construction loan in place from Bank of the Ozarks and up to 17 pre-sales expected to close in the next several weeks, The Charles could be in development by June, Loudermilk said.

At 309 East Paces, it’s launched an adaptive reuse project that will convert the old Aaron’s building into office space for creative class companies.

“I think the Buckhead Village is about five to 10 years behind Midtown, because even though the Buckhead residential projects are being built, but most of those units aren’t completed yet,” Loudermilk said.

“I like to take neighborhoods and transform them, taking older retail and older buildings and bringing them up to date. That has been done in Midtown, but in Buckhead you still have a lot of older retail that needs to be revitalized.”

Apartment developers such as Mill Creek Residential, Alliance Residential, Trammell Crow Residential, Lennar Multifamily and Hanover all have current or planned projects in and around the Buckhead Village. Many are developing empty parking lots or redeveloping outdated retail buildings.

Starling has been leading an effort to update a more than 15-year-old master plan for Buckhead.

“The hardest part is making sure that we keep some of that ‘local flavor’ long-term Atlantans know and love, while creating an area that is walkable and vibrant,” Starling said of the Buckhead Village.

In Midtown, Coro sees the deal with Loudermilk as a long-term play, Fransen said.

The Midtown retail space becomes another core asset in the company’s portfolio. The more than 600 parking spaces are an important piece of the deal, too, especially as more Midtown parking lots are acquired and developed.

“It’s hard not to be optimistic about Midtown right now,” Fransen said.