Atlanta’s skyline is changing so rapidly it’s difficult to keep up. In the city, the Beltline is converting abandoned railways into public spaces. It’s a sweeping urban renewal project uniting intown neighborhoods and serving as a magnet for economic development.

In the suburbs, State Farm is building a massive regional headquarters on top of the Dunwoody MARTA station. In cities such as Roswell and Duluth, downtowns are again bustling with people. They’re living in new houses and apartments in walking distance to Main Street boutiques and restaurants.

Atlanta is no longer the national poster child of sprawl. It’s talking about expanding MARTA. It’s building more walking trails and bike paths. But, one thing remains the same— Atlanta is still the South’s most exciting commercial real estate market. 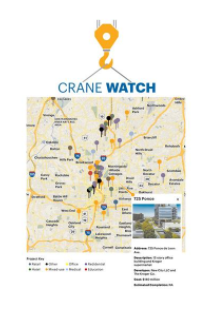 That’s why Atlanta Business Chronicle is launching Crane Watch, an interactive map of all the new projects that are changing your skyline and your neighborhoods. Crane Watch will appear on the Chronicle’s web site beginning today (see below). Each project on the map contains a link with information such as the developer, the architect and completion date.

Crane Watch includes dozens of developments, from those in the earliest planning stages to some less than a year away from opening.

Even so, there are always new projects to add. Tell us what we’re missing.

While WeWork wasn’t specifically mentioned in the meeting, renderings showed a plan for “open office tenant space.” Over the past week, sources have said WeWork is talking with the building’s owners, a pension fund advised by Lincoln Property Co.

A representative for Lincoln Property presented the plans, but declined an interview seeking additional information.

The building at 1372 Peachtree St. sits next to Midtown Plaza and has remained empty for at least a decade.

The new look involves demolishing the current facade and replacing it with glass windows and a large steel staircase that spans the three stories.

“We are looking at introducing a modern aesthetic,” Porter said.

The outdoor plaza would also be redone to create a gathering space.

The DRC seemed supportive of the project, with one member Penelope Cheroff saying, “I think you’ve taken the building a long way.” It’s not the first time a renovation has been planned for 1372 Peachtree. In 2005, Parkside Partners planned a major overhaul of the property. But after it cleared out the tenants, it sold the building to Trizec Properties.

Lincoln Property acquired the building on behalf of its client in April 2015 for $3 million, according to Fulton County property records.

WeWork already has office space in Buckhead’s TowerWalk, the retail component of the Tower Place mixed-use development. For the past year, it’s been been talking to Midtown property owners about additional locations.

In Atlanta, the company is represented by Cushman & Wakefield’s Lawrence Gellerstedt and Clinton McKellar, along with Ken Ashley and Sam Hollis.WeWork started in New York five years ago. It evolved from an earlier co-working concept called Green Desk, a startup founded by entrepreneur Adam Neumann and architect Miguel McKelvey. The idea: subletting office space to entrepreneurs as the economic recovery unfolded. It’s been a hit with investors, reaching a valuation of $16 billion, but more recently it was forced to cut its profit expectations.

Well-known Atlanta developer Robin Loudermilk is buying Tuxedo Park mansion Villa Juanita for $7.2 million — one of the priciest residential sales ever in Buckhead.

Loudermilk said he plans to move into the home at 509 West Paces Ferry Rd. with his wife, Frances. He calls Villa Juanita one of the last original and iconic homes left in Atlanta. He’ll renovate the home but won’t alter its architecture. The upgrades could take up to two years.

His father, Aaron’s founder and Atlanta philanthropist Charlie Loudermilk, will be involved in the renovation.

“This was his boyhood dream,” Robin Loudermilk said of his father’s love of the home. It was built in 1922, according to property records. “It means a lot to own a property like this.”

Villa Juanita, a 10,000-square-foot home next to the Governor’s Mansion, was listed for $7.7 million by Ben Hirsh of Hirsh Real Estate–Buckhead.com. The home was on the market for 113 days. Loudermilk said he’s been working on the deal for the past two months. It came together in the past 10 days.

Hirsh never confirmed the buyer or the seller but property records show the home was last bought by the Australian billionaire Anthony Pratt, the executive chairman of Visy Industries, from Janet Kern in July 2000 for $5.35 million.

Villa Juanita is the No. 7 most expensive sale of all time for a home in Buckhead, according to Hirsh Real Estate, citing data from FMLS and public records.

The house sits on 7.3 acres and has 14 rooms including four bedrooms, five bathrooms and two half-bathrooms. It also features a 70-foot-long pool, walking trails, indoor and outdoor pools, gym, sauna and gardens, according to the listing.

North American Properties is starting construction on a 287-unit Sandy Springs apartment project amid the city’s cluster of hospitals and medical offices known as “Pill Hill.”

BMO Harris Bank, the U.S. operation of Bank of Montreal, is providing construction financing. Groundbreaking is set for this week, Toro sid.

“Pill Hill” is a medical hub near the intersection Georgia 400 and the Perimeter where three major regional hospitals combine to create a major employment center: Emory-Saint Joseph’s, Northside Hospital, and Children’s Healthcare of Atlanta.

North American first proposed the project last year and eventually received approval from Sandy Springs, though not without concerns about the apartments adding more traffic.

Like many other developers across Atlanta, North American eyed a site close to MARTA because it believes more employees want to live and work within walking distance of transit. Pill Hill is less than a half-mile from the Medical Center MARTA station.

“We expect that walkable proximity to almost 20,000 healthcare jobs on Pill Hill, coupled with immediate access to the Medical Center MARTA Station, will make Pill Hill an extremely attractive alternative to other more autocentric properties,” Toro said in an email to Atlanta Business Chronicle.

Gwinnett Convention and Visitors Bureau will enter negotiations with North American Properties, which is known for several intown Atlanta projects.

But, it also brought walkable urban development to Alpharetta on the Georgia 400 corridor. That project, called Avalon, lured retailers from nearby North Point Mall and chefs from intown Atlanta. It sold earlier this year for more than $500 million.

Avalon was also part of a broader discussion about extending MARTA farther north into Fulton County.

Last year, Gwinnett officials said they wanted to attract up to $1 billion worth of development around the county’s arena/convention center complex. The county was impressed with North American Properties’ ability to mix strong retail and dining lineups with popular amenities. “Their vision is not only compelling–it is truly compatible with what we hope to see at the IEC complex, Gwinnett Convention and Visitors Bureau CEO Preston Williams said of North American Properties.