Buckhead resident and business leader Robin Loudermilk set the tone for the Atlanta Police Foundation’s 13th annual Crime is Toast Breakfast Aug. 30 telling the audience of about 1,000 city residents, business and government leaders and police officers, “It takes each and every one of us to continue to make Atlanta, a model city for public safety.”

Before Loudermilk took his seat, he quoted an old proverb: “If you want to go quickly, go alone. But, if you want to go far, go together. Simply put, there is strength in unity. Let’s continue to work together for this city we call home and reach our mission to make Atlanta the safest large city in the nation.” 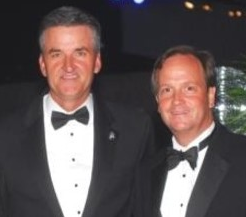 “During this time not a day has gone by that I haven’t been incredibly impressed and humbled by the courageous men and women of APD,” Loudermilk told the crowd. “The leadership of George Turner the APD Command staff and our Mayor Kasim Reed is without question, best in class and I am proud to do my part in lending my time, my talents and my treasure to help make Atlanta the safest large city in the nation.”

The Crime is Toast Breakfast gathered business and community leaders Tuesday, Aug. 30, in a display of support for the Atlanta Police Department in the Georgia Ballroom at the Georgia World Congress Center.

Before turning over the microphone to UPS Chairman & CEO David Abney, who was honorary chair for the event, Loudermilk stated, “When I look up and see those cameras with the blue lights—just to let you know, we’re at approximately 7500 integrated to date—or when I hear from friends and neighbors who want to help the Atlanta Police Foundation build houses for officers, renovate an apartment complex for new recruits and continue to build out programs that keep our young people off the streets, I can’t be more proud.”

This past June, the Atlanta Police Foundation kicked off a $15.6 million campaign—“Cutting Edge, Cutting Crime, A Campaign for a Model City”—chaired by Jeff Sprecher. To date, the APF has raised more than $10million. “Just so you know, this was intended to be a three year campaign,” Loudermilk said. “Even with this wonderful progress, we can’t slow down.”

Loudermilk may have set the tone for the breakfast, but the morning was highlighted by the State of Public Safety address given by Mayor Kasim Reed and followed the State of the Force speech given by Police Chief George N. Turner, who praised the men and women of his department who come to work every day to work with young people…”to mentor them rather than putting cuffs on them. We have to eliminate those people from becoming criminals.”

It also included the annual Awards Ceremony, which recognizes acts of bravery and dedication by the men and women in blue throughout the year. Dave Wilkinson, president and CEO of the Atlanta Police Foundation presented the awards and gave closing remarks reminding everyone that “only through working together will we achieve success.” Speaking of the awards, Zone 2 officers were among those honored during the ceremony.