Loudermilk Cos. poised to redevelop massive block in East Village

The Loudermilk Cos., is poised to begin redeveloping the largest block of land in Buckhead Village East since OliverMcMillan renewed construction of Ben Carter’s former Streets of Buckhead and turned it into Buckhead Atlanta. It all likely will begin in early 2016.

The block—actually two long blocks in length—extends from North Fulton Avenue to the intersection of East Paces Ferry Road and Buckhead Avenue at Old Decatur Road and includes four major redevelopment sites, interrupted only by the Paces 365 condominiums.

A couple of years ago, the development company purchased the State Bank headquarters building at the intersection of East Paces Ferry and Buckhead Avenue, which forms the eastern end of the mega-block they plan to redevelop.

And, the company recently announced it is a partner in the purchase of the Aaron’s headquarters building the stretches along North Fulton Drive from East Paces Ferry and Buckhead Avenue. They plan to gut that building and refurbish both the interior and exterior as office space.

Loudermilk Cos. President and CEO Robin Loudermilk points to a mega-block of properties in the East Village the company plans to soon redevelop. 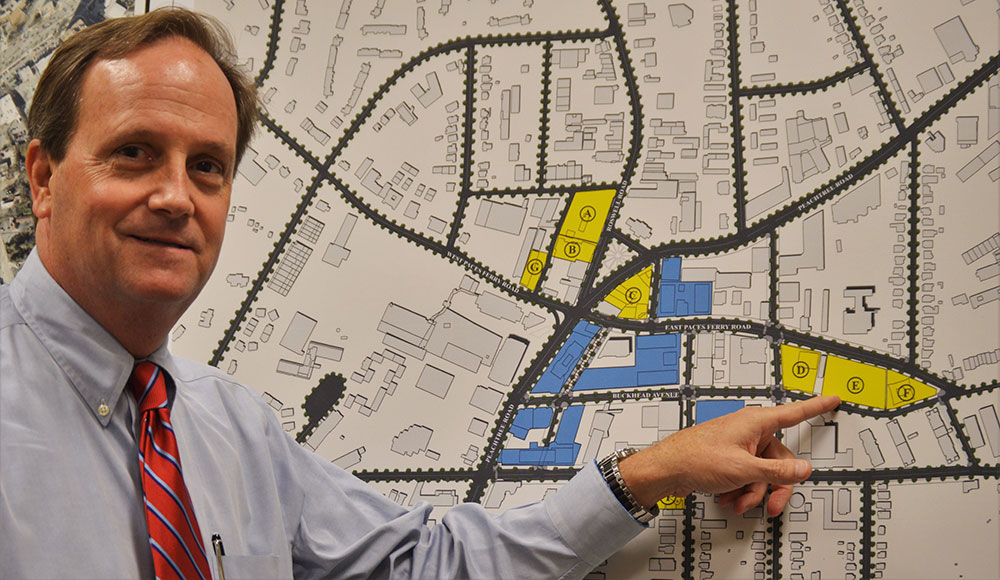 In an interview Nov. 10 with Loudermilk Cos. CEO Robin Loudermilk, he told BuckheadView it is just a matter of what falls into place first as to when construction begins on the various projects the company has on the books. And, yes, those properties are not all that are in play for development soon in the Buckhead Village by Loudermilk Cos.

For instance, once the office building is completed at 359 East Paces Ferry, State Bank will move its headquarters into that building and the present State Bank site becomes available for redevelopment. “That might make a great site for a boutique hotel,” Loudermilk said.

Another major block of East Village land is planning to redevelop soon is the triangle formed by Peachtree and East Paces Ferry roads and Bolling Way—all except for the Mitchell Gold furniture store.

At this time last year, the Loudermilk Cos filed with the city for a demolition permit for all of the buildings facing Peachtree and East Paces Ferry roads in the triangle and most of that—except for Mitchell Gold, Fish Hawk and Chuck’s Firearms stores have been demolished.

Loudermilk told BuckheadView the company goes back and forth as to whether to make the multi-story, mixed-use redevelopment for that site a luxury residential building—either condos or apartments—with ground level retail or an office building with ground-level retail. That primarily is what is holding up redevelopment of the site, he added.

Loudermilk said that an argument for residential on that site is the lack of space to provide a parking deck. Whichever way the company plans to go, he explained, entrance to the parking would be off of Bolling Way. Everything else is too congested.

Of course, Loudermilk said Bolling Way also is a problem block there because it is the route everyone takes from Paces Ferry Road to get to Peachtree Road and northbound Roswell Road.

And, then there is the situation that OliverMcMillan is planning to develop the previously announced The Office Buckhead Atlanta across Bolling Way from Loudermilk’s property, stretching from Peachtree to East Paces Ferry Road.

The Loudermilk family has long been considered the largest single landholders in Buckhead Village area and much of this property has been in the family for years, just waiting for the right time for redevelopment.

The Loudermilk Cos. have also been directly involved with the land where two major apartment development projects presently underway by the Hanover Company: one a massive redevelopment of an old apartment project on property bordered by Pharr Road, Old Decatur Road and Buckhead Avenue, across the street from the State Bank headquarter, and the second on the former parking lot next to the Buckhead Theatre on Roswell Road.

The company owned both properties before selling them to Hanover. Loudermilk Cos. will buy back from Hanover the ground-level retail space and the retail and theater parking spaces at the news development and operate those spaces.

The company also owns the PNC bank site at the corner of Pharr Road and North Fulton Avenue, the Harry Norman Realtors on Pharr Road and the former Pearson’s liquor store site at West Paces Ferry Road and Early Street, which the company has totally redeveloped as a successful retail strip center, just to name a few properties.

But the big question now is which of the properties in the mega-block on East Paces Ferry will be the first to go to construction in 2016. Loudermilk told BuckheadView it all depends on a few details being worked out and certain elements falling into place.

Rendering of the Hanover Company apartment building under construction next to the Buckhead Theatre.

For instance, some demolition work has begun—especially on the interior—on 359 East Paces Ferry and there is a known anchor tenant in State Bank waiting for that office/retail building to come out of the ground. But there is a hitch. They are being careful not to disturb the small medical office that sits on a sliver of property between that building and 371 East Paces Ferry.

Loudermilk also knows he has one confirmed tenant for the 371 East Paces Ferry medical office building, and medical office space is a hot commodity right now. So, that likely could be the first project to go to construction.

On the other hand, Loudermilk told BucklheadView that there has already been some leasing interest in the Aaron’s headquarters building, so the company may have to begin work very soon on build-to-suit construction of the exterior and interior of that building, which is over 50 years old.

Loudermilk told BuckheadView that years ago—when it was still possible to do—he tried to get his father Charlie Loudermilk, the founder and then CEO of Aaron’s Rents, to transfer the building he developed to the family, but his father refused. He said that would have cost about one-fourteenth what the building recently cost to purchase.

As for the present State Bank building property, Loudermilk really thinks it could become a good location for a boutique hotel, within easy walking distance of Buckhead Atlanta and a lot of other Buckhead Village retail shopping, restaurants small boutiques and salons. But that will have to wait until State Bank moves into its new headquarters space at 359 East Paces Ferry.

And, they still have to come up with a plan for the triangle property at Peachtree, East Paces Ferry and Bolling Way. “But I hate to see that empty lot right there on a prime Peachtree Road site in the heart of Buckhead Village and across the street from Charlie Loudermilk Park.”

Asked what the value of Loudermilk Cos. block of Buckhead Village properties is worth today and will be worth after redevelopment, Loudermilk said, he wasn’t really sure but “maybe $60 million today and possibly $200 million in five to six years,” which may be the time it takes to finish developing all the property.

But one thing he emphasizes: “We are going to own this stuff long-term. We are not going to sell them.”