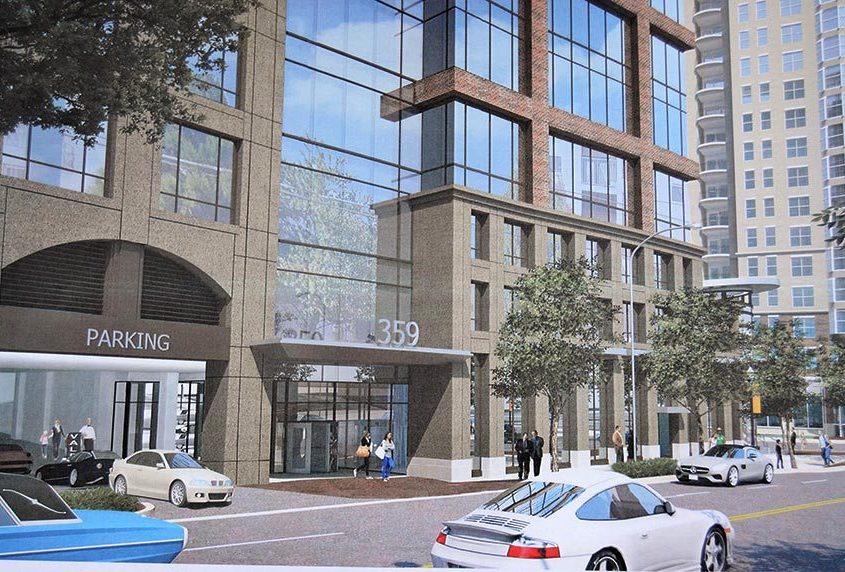 The Loudermilk Companies today presented plans to the Development Review Committee of SPI-9 (Special Public Interest District) for a 12-story office building with ground-floor retail at 359 East Paces Ferry Road, which could kick off a new reformation wave in the Buckhead Village.

Loudermilk had filed on Feb. 6 for a demolition permit to remove the present aged and unattractive building on the site, and Loudermilk Companies President Robin Loudermilk told BuckheadView he would like to begin demolition immediately and construction to start in the fall.

Robin Loudermilk, who along with his father Charlie are the largest landholders in the Buckhead Village, also told BuckheadView that new development on the triangular property bordered by Peachtree and East Paces Ferry Roads and Bolling Way likely would follow six months later.

That property, which presently includes a strip shopping center but was recently cleared of other buildings that had housed bars and restaurants, is across Bolling Way from the former Hi-Fi Buys building site now owned by OliverMcMillan.

OliverMcMillan is considering a seven- or eight-story office building that would rise on the former site of HiFi Buys. Estimates are that Oliver McMillan will redevelop that site beginning in 12 to 18 months from now.

Thus a new wave of commercial development is starting in the Buckhead Village and being primed by one of Buckhead’s leading families, the Loudermilks.

Robin Loudermilk was not at the DRC meeting Wednesday, but the company was represented in part by Charlie Loudermilk—not Robin’s father, but his son and grandson of the longtime Buckhead business leader, the senior Charlie Loudermilk.

The younger Charlie Loudermilk III, who is project manager for the new building at 359 East Paces Ferry, was joined at the DRC meeting by Brian Lu, vice president of development for The Loudermilk Companies and representatives of architectural firm Rule Joy Trammell Rubio, which is designing the project. 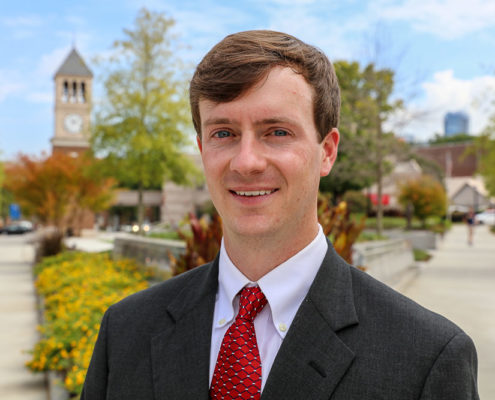 This would be the first new speculative office building developed in the Village in years. Loudermilk proposes a 12-story building, with about 125,000 square feet of office space, built on top of a parking deck and with ground-level retail on three corners.

The building would have retail exposure on East Paces Ferry Road, Grandview Avenue and Buckhead Avenue, with the corner retail space designed for a banking center, which would also have drive-through banking windows on the ground floor of the parking deck.

The façade of the building would be high quality stone and brick and glass. It would have motor entrances to the parking deck on both East Paces Ferry Road and Grandview Avenue. Each office space floor would have about 23,000 square feet of space.

The Loudermilk Companies has said that its 359 East Paces project would target boutique office tenants, most likely from 5,000 square feet to 10,000 square feet, seeking an alternative to the dense office environment around the MARTA stations, Lenox and Phipps Plaza malls.

According to the Atlanta Business Chronicle, development costs would approach $400 a foot and building rents would also be in the range of $40. Cushman & Wakefield has won the leasing assignment.
The Buckhead Village has turned into one of the hottest neighborhoods for development in the city.

Houston-based The Hanover Co. has proposed a residential tower next to Buckhead Theatre, one of the oldest buildings in the Village. Closer to 359 East Paces, Hanover also recently demolished the 4-acre Parkside at Buckhead apartments between Buckhead Avenue and Pharr Road. It plans to build a new apartment project called Hanover Park Place.

Another recently announced apartment complex that is right around the corner from Pharr on East Paces Ferry Road is the Gables development, which will have 327 units in a mid-rise building at the corner of Maple Drive. The property was sold to Gables by the elder Charlie Loudermilk.