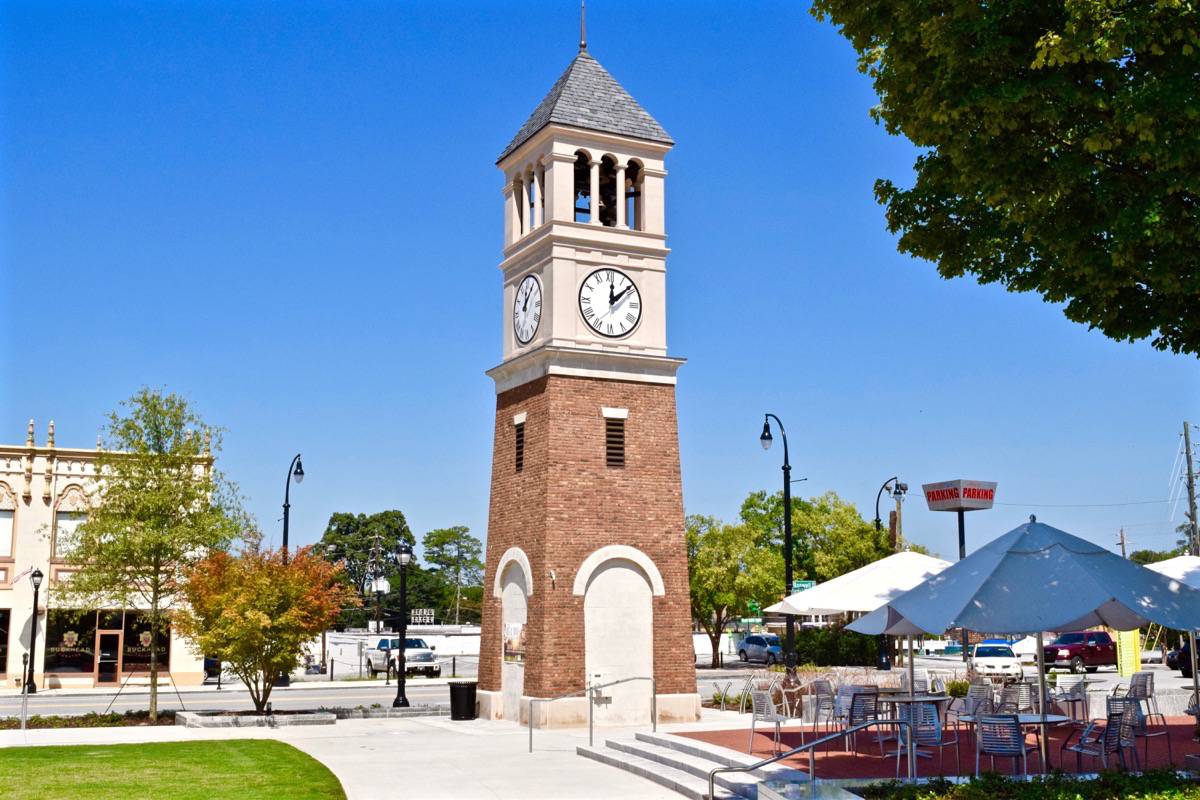 The sun was shining brightly and the temperature pushed into the 70s as 200-plus invited guests gathered in the triangle formed by Peachtree and Roswell roads and Sardis Way—the very heart of Buckhead Village—to celebrate the reopening of the totally remade Charlie Loudermilk Park.

Sounds of Dixieland music waft through the clean, crisp Spring air as business and civic leaders, and old friends of Loudermilk, who is often referred to as the honorary mayor of Buckhead, gathered, sipped lemonade, munched on sandwiches and exchanged praises of the park’s new design.

Charlie was there with members of the Loudermilk family and with his longtime friends and business associates, architect and developer John Portman and Pano Karatassos, owner of the Buckhead Life restaurant group, to name just a couple.

The carillons in the 50-foot clock tower at the northwest corner of the park chimed in the noon hour, but could barely be heard over the Dixieland music and chatter among guests, politicians and those who represented groups responsible for the new park.

Dist. 7 Atlanta City Councilman Howard Shook, who has as a mission expanding and improving park spaces in his district, told BuckheadView, “It is good to see this turn into a real park that people can actually use.” He said the triangle park previously “was simply sort of a traffic island.”

Shook added, “This is an unbelievable day for all of us who have toiled to create more green space” in Buckhead and the city of Atlanta.

The rebuilt park has been a work in progress—in one form or another—since 2009, but has been seriously in redesign and construction phases for more than two years–the total cost of which was just under $2.4 million, with construction costs of $2.08 million.

The Buckhead Community Improvement District, who had taken over redevelopment of the park, originally announced at least some of it would be open to be used as part of a flower show that was held in the Spring of last year.

As the landscape architect on the project, Robert Hughes, told BuckheadView, the 2014 date “was far too aggressive.” And, the park is not yet totally completed.

“This park is not finished,” Buckhead CID Executive Director Jim Durrett told those attending the reopening ceremony and ribbon cutting after a list of dignitaries had their opportunity to pay homage to Charlie Loudermilk, the man of the hour for whom the park is named.

Durrett said there still are plantings to do and some fine tuning to attend to and “eventually we will find a piece of public art—maybe a sculpture piece—to add” at the apex of the park where a place has been set aside for it.

Oh, and Durrett also announced before closing the ceremony with the ribbon cutting, “We have found an area in the park to finally place some 200 bricks” that were purchased back in 2009 by donors to the redesign of the park.

Durrett explained that the bricks those people purchased in support of the park will be placed around the sitting area in the park that backs up to Sardis Way and provides an area for people to sit and eat their lunches if they wish.

At Tuesday’s ceremony, BuckheadView asked Robin Loudermilk, son of Charlie and former longtime head of the Buckhead Alliance which started the brick sales, if he had anything to do with the change of mind regarding the removal of the bricks.

The younger Loudermilk, who also sits on the board of the Buckhead CID, told BuckheadView he had met with Durrett and Hughes at the park and told them the donor bricks were always meant to be paver-type bricks like those that were already part of the park design in that seating area.

The green grass and granite walkways and walls, along with the continuously flowing lineal fountain formed a perfect setting for a ceremony lauding the contributions of Charlie Loudermilk, the statue of whom in the park faces the Buckhead Theatre across the street which Loudermilk paid millions to buy and refurbish as another Buckhead landmark.

Much of the money that went into the design and construction of the new park also came from the man the park is named for, but the reason for the naming is based on his life of philanthropy and leadership in Buckhead and the city of Atlanta.

And, this was not the day on which the park was named Charlie Loudermilk Park. That took place on an earlier date and at another event. But, as Loudermilk is now 87, it is more than reasonable to renew the reasons why the park was so named.

Atlanta Mayor Kasim Reed, who was the first speaker during the brief ceremony, told the audience, “I’m here because of a very special person, Charlie Loudermilk.” Pointing to the two men sitting in chairs before him, Reed added, “Charlie Loudermilk and John Portman are two leading lights in Buckhead and the city of Atlanta.”

“Life is a series of moments. Today we come here to pay respect to Charlie Loudermilk,” the mayor stated. “I am grateful to you personally.”

“His philanthropy has made a difference throughout the city,” City Council President Ceasar Mitchell said of Loudermilk. “This park is the least we can do to honor and celebrate you.”

Buckhead CID board chairman David Allman, recalled that the CID was formed out of a meeting at Loudermilk’s farm. Allman also praised Robin Loudermilk stating, “During the (Buckhead) Village’s darkest days, you stepped up with your leadership and financial resources for the future of Buckhead.”

Shook was one of the final speakers and paid Loudermilk what he called the highest compliment he can offer: “Charlie, you are a great American.”

Executive Director Denise Starling, both of which were absent due to medical reasons.

So, what does Loudermilk think of his namesake park? “I am truly honored…I love it,” said the man who doesn’t do much speaking these days. And “It turned out better than I thought it might. I am very, very impressed that people will now have such a wonderful place to come and enjoy.”

Following the invitation-only ceremony, the park was opened to the public at 1 p.m.