A return to roots, a big future in store for historic icon

Back to the future.

It’s a pretty good description for what will be happening to the New Perry Hotel in the coming months and next handful of years.

“Take it down to its bones and make it what it needs to be,” said Robert Loudermilk Jr., president and CEO of Loudermilk Companies out of Atlanta, who is partnered with Jarrod Brannen, owner of Brannen Outfitters locally, in buying the hotel. Brannen, Loudermilk said, is officially its new “owner.”

“We’ve got to clean it out,” Loudermilk continued. “Over the years it’s accumulated a lot of clutter. Not only ‘stuff’ but ‘walls’ and ‘additions’ and ‘enclosures’ that just need to go. Get back to the original bones. And then we’ll go from there.” 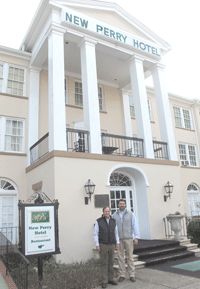 The “future,” in other words.

Part of it has been determined and part has not. The part that has: recreate the gardens. That is, Loudermilk said, if they can find pictures and/or paintings showing them what the gardens looked like when it was first built. (“Perhaps in the basement,” he joked, which is full of the aforementioned “stuff.”) “(Recreate it), clean it up so people can walk through there and have weddings there and receptions.” (The pool might go, he added.)

What’s also been determined is the ground floor. It, he said, will be a restaurant-bar. But even in that, he said he wants to recreate history.

“I see it as the New Perry Hotel revamped,” he said. “Where you take the old menu,

the bread balls and everything they had there, which we all had a thousand times (both he and Brannen have been visiting the hotel since they were children) … all those things, and then add kind of a new flair to it.”

The question mark then is what to do with the second and third floor.

“Does it need to be a hotel,” he asked. “And if it does, do we combine two rooms (into one)? We’ve definitely got to update the bathrooms. I was in New York not too long ago and looking around at a couple of hotels. Some of them had nice walk-in showers and flat-screen TVs. Do we go that route? (Or) does it need to be an office? It could be an office.

“So we’ll see. I’ve got people like Larry Walker and James Farmer and people in the community trying to figure out what it needs to be. And there are people out there who’ve done this before. They know what they’re doing. We’ve just got to get them together.

“And we’ve talked to some of those folks. Construction folks and architects that know what you could be doing and should be doing. And ‘could’ and ‘should’ needs to meet in the middle because it’s an older structure and it doesn’t have central air and some of the creature comforts we need. But we can get it done. It’s going to be a fun project.

“I mean I kind of believe the markets will tell you (what those floors need to be) if you listen enough.”

Regardless of how it ends up – and Loudermilk said just the “cleaning out” part could last up to a year and reopening may come no earlier than two years from now – both said the spirit of the building built in 1894 will live on.

“Being from here and growing up here,” said Brannen, “the New Perry Hotel, all of it together, is an ‘experience’. They’re (visitors) not going to come here to the New Perry Hotel for a room. It’s for the experience. That’s one of the reasons why Robert and I want to be patient. Make sure it doesn’t change what it does well.

“You can feel it,” he added. “I can walk in there and I can hear it like when I was a little boy. All of the sounds, everything that’s going on and the white tablecloths and the southern flair. So you don’t want to change anything to lose that experience.

“And Perry itself is unique because it’s the crossroads of the state. Everything comes to Perry. And we all know that. That’s why we’re excited about it. So Perry’s got so much to offer. And that’s one of the key things and why we didn’t want it (the hotel) to get in the wrong hands and lose something that can never be brought back.

“It’s kind of like the granddaddy of Perry. It’s the New Perry Hotel.

“So that’s why the patience and making sure we don’t change the experience feel. Do the right thing. Find a very passionate person who knows it, lives it, breaths it (to run it). And that’s another key. So they don’t change the experience. Our thought is, ‘We’re very excited about it. We’re very glad we have it. Now let’s take a breath. What can we make it? It’s already good at what it does.’ We just want to give it a facelift and make it better.”

Loudermilk, whose father (founder of Aaron’s: Rent to Own Furniture, Electronics, Appliances) and grandfather were also frequent visitors, echoed those sentiments. “It ‘is’ Perry,” he said. “It’s an institution.”

It’s also a piece of the puzzle – albeit a very big piece – in his overall vision. Loudermilk said he sees it as a key piece in connecting the Courtney Hodges corridor and the Georgia National Fairgrounds and Agricenter with downtown, as well as the Ag Village currently in development across the Interstate opposite the fairgrounds. So far it includes Brannen Outfitters, David Ragan Ford’s soon-to-be-open new dealership (part of the partnership), he has bought the building that was previously Priesters Pecans and he said he is looking for more (in that area and elsewhere in Perry). The plan, he stressed, is not to draw business out of downtown but again, “connectivity”.

“So that there’s some continuity when you come through (town),” he said, the grand vision also including revamping Interstate exits – planting trees and shrubs of the same variety as those found on the grounds of the New Perry Hotel and the ag village – so they call out to travelers: “stop here”. He said he’d also like to work with the city to see a roundabout up near the fairgrounds, etc. (He said he has never read or heard of Perry’s Master Plan but you would never know it. Many of his priorities are the same the priorities the city has identified as its.)

“I call it the ‘same-different’,” he said. “Keep that same continuity coming throughout. Maybe a series of clock towers. They already have that at the Ag Center, maybe bring that to the New Perry Hotel. But keep it the hotel. I’m not trying to make it the hotel/ag center. But keeping a common theme (from one end of the town to the other) so you know you’re in Perry.

“You know you’re still in and you’re connecting everything. That’s what I believe is needed. That’s what I hear everybody wants. Getting that connectivity in there. It sort of leads people back into town. ‘It’s obvious where you need to go.’

“So you tie all that in and the New Perry Hotel becomes kind of the hub of downtown.”